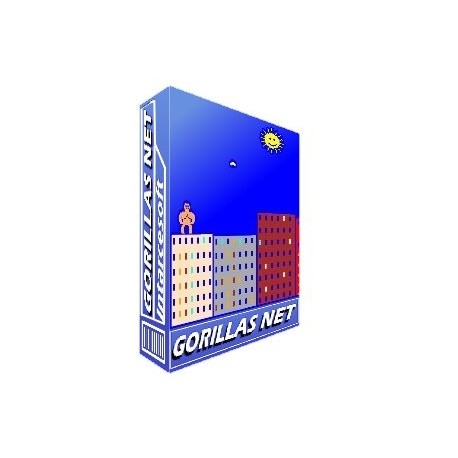 See, calculates and releases explosive bananas with this classic game of artillery. Now updated for Intarcesoft to VB.NET.

See, calculates and releases explosive bananas with this classic game of artillery. Now updated for Intarcesoft to VB.NET.

Intarcesoft back again updating another classic game, a pioneer of BASIC, the GORILLA.BAS language. The game is kind of ballistic artillery and puts us in the role of a gorilla to do complex mathematical calculations to throw an explosive banana to his opponent. A mixture between Rampage and Scorched Earth.

In this case much of BASIC code was used and adapted to Visual Basic .NET, all this while respecting the single-tasking philosophy of the classic game in MS-DOS, it was as close as possible to the original; both in code, as well as graphics and so do a tribute to this great game.

The graphics engine used was the GDI + and the sound is the player wav format so only use the available language natively and avoid using external libraries so that the game runs without additional installation .

It is currently in version 1.0, soon will make another small update to work even better. Both the source code and compiled as the game can be downloaded from the links below.

We only hope that like the GORILLAS.BAS, this game will serve to play and learn about the world of computer programming.
Updated for:
Intarcesoft Inc.
Version of August 21, 2016

key for compressed files: intarcesoft.com.ve
Totally free of viruses and malicious software, so do not wait any longer to download it now.

Do not forget to give us an opinion on this program, to improve the content.

Do not let see the article Galactic S project, the new game Intarcesoft. Give us your opinion about the gameplay.

If the question you have has not yet been answered here, use the form below to ask something about this addon.

If the download link redirects to another product that is not described in the article or is broken, report it using our Reporting Form